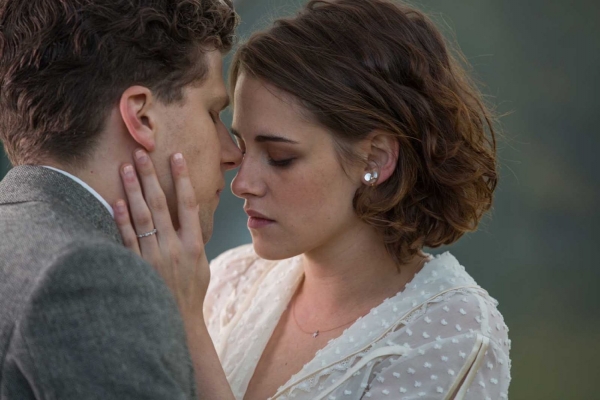 Woody Allen did a lot right in his direction of Cafe Society, the Hollywood legend’s period piece about a New York City kid coming of age in the 1930s. Bobby Dorfman moves to Tinseltown and takes up under the tutelage of his bigwig agent uncle Phil Stern, hoping to learn about the life and maybe life, too. It’s a beautiful view out there until things fall through, pretty as a picture on the 1 hour, 36 minutes of Blu-Ray viewing on my flat screen.

But Woody Allen’s tale isn’t entirely satisfying as its telling.

Allen put together a stellar cast for that time and two places, and they embraced both parts.

Steve Carell goes deep. He’s warm as Uncle Phil, cagey as agent to the stars Phil Stern and confused as a cheating husband who after much anguish decided to leave for his much younger assistant.

Jesse Eisenberg appears to relish his chance to take on the Allen role of past decades. As he travels the personal journey from naive nebbish who falls so hard for that very same young woman to a successful club owner in Manhattan who navigates the rich and famous table-by-table with his beautiful wife taking care of their kids at home, he even at times talks in that trademark Allen New York pattern. You’d never know this is the same actor in, say, the Now You See Me movies. Blake Lively is lovely as that wife, falling for those ways and confident in her participation in his big picture.

But it’s Kristen Stewart who truly lights up the screen in every shot as Vonnie, who must choose between Phil and Bobby, live with that choice, them, and herself.

Of course, it gets messy in other family matters, too, as Allen tales usually do. Those things get settled.

Bobby and Vonnie, maybe not so much. It’s the kind of ending that makes you want to hit fast forward for the next scene.

'Cafe Society' is part of the LPL MediaBank collection.