In addition to the online historic photo collection, Liverpool Legends videos and walking tours of Liverpool's past available from the library, there are several nearby museums that highlight local history.

The Skä•noñh – Great Law of Peace Center is a Haudenosaunee (Iroquois) Heritage Center focused on telling the story of the native peoples of central New York. The history is told through the lens of the Onondaga Nation and covers topics such as Creation, European Contact, The Great Law of Peace, and more. The Onondagas, or People of the Hills, are the keepers of the Central Fire and are the spiritual and political center of the Haudenosaune. The facility is operated by the Onondaga Historical Association.

The Salt Museum, located on the shore of Onondaga Lake, is full of dynamic exhibits and artifacts. Constructed from timbers taken from actual salt warehouses, it provides an old time rustic experience during your visit. Open in the summer.

Below is a brief timeline of the area from 1500 to today.

Around 1500, in the forest surrounding shining Lake Gannentaha (now called Onondaga Lake), a council fire was lit. As it burned, representatives of five Indian nations assembled to hear the words of Hiawatha: “Be a united people and you will conquer your enemies." Thus was formed the Iroquois Confederacy, on the rise of ground near what was to become Liverpool.

Here is a brief timeline of European contact in the area: 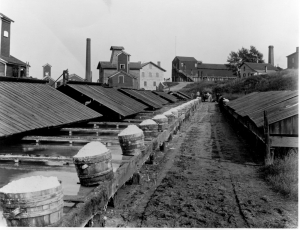 Salt manufacturing was a major industry in Liverpool and Syracuse during the nineteenth and early twentieth centuries. Contrary to popular belief, salt was not mined here. Brine was pumped from local springs and sent to boiling blocks. These blocks contained rows of cast iron boiling kettles which were wood-fired. The brine was boiled and the salt crystals that remained were packed and shipped all over the United States and beyond. Taxes collected from the salt industry helped to finance the construction of the Erie and Oswego canals.

As time went on, wood to fuel the salt blocks became scarce and expensive. Salt production changed from a boiling process to a solar powered evaporative process. Brine was pumped into solar salt rooms, which were shallow rectangular vats 16 by 18 feet long. Each solar salt vat had a roof that could slide over it on rails, in the event of rain. As the sun shone down on the salt brine vat, water evaporated, leaving salt crystals behind. Rain could spoil the solar salt harvest, so if storm clouds approached, bells were rung and residents raced to the solar salt yards to slide the covers over the vats. Salt production eventually ended after larger salt deposits were found in Michigan and points west, were salt could be mined at a lower cost. Liverpool's last solar salt yard closed in 1926. 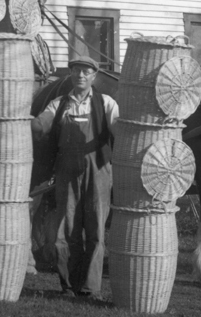 Solar Salt production typically took place during the summer months. During the winter, many Liverpool residents took part in a cottage industry: willow weaving. The willow that they used was not from the weeping willow tree that most people think of when they hear "willow." Rather, the willow used in baskets grew as a shrub in marshy areas.

Branches were harvested in the fall and sent to a willow steamer, where they were steamed to soften the bark, which allowed the bark to be stripped from the branch. Steaming and soaking made the willow flexible enough to be woven without breaking. Many Liverpool families had willow shops behind their homes where the entire family would gather to weave baskets and even furniture. Many of the willow laundry baskets sold in the United States came from Liverpool.

Onondaga Lake was home to many resorts during the late nineteenth and early twentieth centuries. These resorts often included rides, shows, restaurants, dance halls, and hotels. Some ran packet boats from one end of Onondaga Lake to the resort and back. Others could be reached by trolley line. Long Branch Park located a few miles west of Liverpool was one of the last resorts to close. People came from miles around to attend picnics and to ride the carousel. When Long Branch park eventually closed in 1938, the land was donated to Onondaga County and remains parkland. The buildings either burned or were torn down, and the carousel was placed in storage. In 1941 it was sold and moved to Roseland Park in Canandaigua, New York, where it remained until Roseland closed in 1985. Pyramid Development Corporation purchased the carousel and had it restored. It still operates today at Carousel Center, a large shopping mall located on the south shore of Onondaga Lake near the former site of the Iron Pier amusement park. 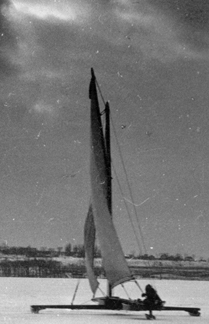 You might think that with all the salt manufacturing going on around Onondaga Lake, that the lake itself would be salty. In fact, it is a freshwater lake and home to several species of fish. In the 1800s, Onondaga Lake whitefish was served at fine restaurants in New York City, hundreds of miles away. Since it is a freshwater lake, it freezes in the winter and was a venue for ice boat races. Iceboats look like sailboats, but have runners in place of a hull. On a good day, they could skate across the frozen lake at speeds in excess of 60 m.p.h.

Today, Onondaga Lake Park offers many recreational opportunities for residents of Liverpool, Onondaga County, and beyond. Recreational vehicle-free paved trails welcome bicyclists, skaters, and runners. Trams run from the Salt Museum to Willow Bay during the summer months. A 16,900 square foot skate park is open April - October. A marina welcomes boaters and park visitors to the Wegmans Boundless Playground, where they will find "a magical place where all our children and adults- the fully able and those who have physical, sensory, and developmental disabilities--can play and grow together." Onondaga Lake Park is located adjacent to the Village of Liverpool. It is the crown jewel of the Onondaga County Parks system.