Home » Blog » 'The Public' Examines How a Library Balances Rights, Needs and Obligations to Many

'The Public' Examines How a Library Balances Rights, Needs and Obligations to Many 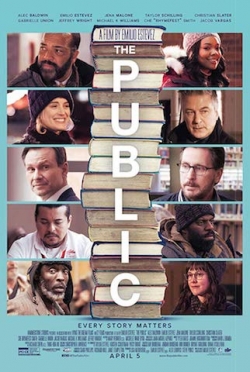 There are many reasons that people enter the doors of their favorite public library every day.

The programs. The WiFi. The computers. The magazines. The books, still and even.

The feeling of community.

I see it in the faces and hear it in the voices as I make the rounds for my job in the communications department of the Liverpool Public Library.

Sometimes these diverse goals don’t always match up. The needs of various patrons may not jive. Perhaps some of the rules set down by the library or social mores get in the way.

The Public takes a hard look at one such night at the main branch of one big city library.

Written and directed by Emilio Estevez, the drama takes place one winter in Cincinnati, during a cold spell that’s maxed out the city’s homeless shelters and caused after-hours stress, and, yes, even the death of one of the many homeless patrons who use the downtown main branch and its welcoming services during its open hours.

Estevez also plays Stuart, a sturdy librarian who’s gained the trust of many of these patrons during his regular rounds, as well as the confidence of colleagues up, down and laterally through the workplace.

Then one day the city’s DA, who’s also running for mayor, comes in with the news of a lawsuit brought by one homeless man who’s named Stuart and the security guard who led him out of the library, citing his body odor that daily offended all around him as the reason for  banishment. The city would prefer to settle. The library chief tells Stuart he’s now on rocky ground.

And then a big group of the daily homeless decide they will not leave the library at closing hours that night to venture out into the bitter cold with no space at any shelters.

Stuart is faced with some personal reckoning, and picks their side.

Alec Baldwin rushes in as the lead police negotiator, a man who doesn’t really want to go overboard tough because he may have some skin in the game.

Christian Slater does well as the villain, the DA who has no problem embracing the Get Em Outta Here role. The public library can’t cave to this group’s need for a warm place to spend the night, or what will some other group ask from the city the next time?! 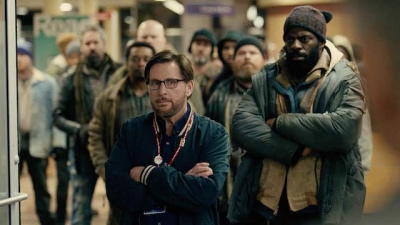 Other shades of sympathies come from a fellow librarian played well by Jena Malone, the raised-eyebrow security guy played even better by Jacob Vargas, the stretched-thin library director played by Jeffrey Wright, Gabrielle Union as a news reporter who's goal is to use the story to further her career and Stuart’s apartment house friend-maybe-more played by Taylor Schilling. (Schilling earned her stripes for her role from her years as main inmate character Piper in Netflix’s way-successful <em>Orange Is the New Black</em>).

Estevez satisfyingly plays Stuart as a man who ponders and follows what he must do to reconcile the past, present and future.

The homeless men show great pride and reason in his wake.

The Public is available in the LPL's DVD collection.