John Gora & Gorale Goes Deep with 'My Polish Roots & Beyond'

The 10th album from John Gora and Gorale delightfully covers a wide span of polka bases.

The band that originates from Buffalo but feels comfortable performing for fans all along the New York State Thruway corridor and beyond gets you tapping your toes to the beat, whistling along to the horn and woodwind runs and maybe even singing along to the familiar English songs covered.

I happened to catch the John Gora and Gorale set on Sunday, June 23, at the Syracuse Polish Fest in Clinton Square. Good work on the stage, I commented to my wife, daughter and her significant. Karen, Elisabeth and George agreed, all veterans of various bands in our growing number of years visiting the fest together.

Two days later, my boss at the library said her sister had a CD for me from one of her colleagues at Liverpool company Lockheed Martin.

That would be Robbie Piatkowski, who plays trumpet and triangle and adds vocals to the 19-song album. 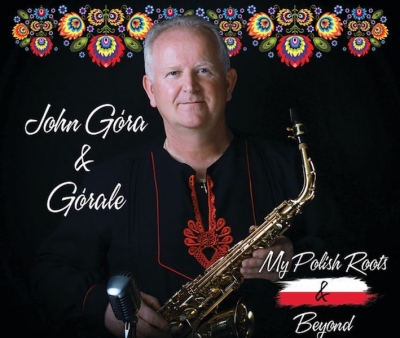 My Polish Roots and Beyond covers decades of Polish traditional, fast, waltz, Obereks, some sung in Polish and others in English.

Gora displays a wise touch in his song choices. The saxophonist and singer has a top band behind him, too. As well as Robbie Piatkowski, of Solvay, the ensemble includes brother Al Piatkowski of Canastota on concertina and accordion. Al is well known in the polka world, and worked with the Jimmy Sturr Orchestra on a Grammy-nominated album. With Ted Lange on accordion, piano, synth and vocals; Dan Mateja on sax, clarinet and vocals; Johnny Winiarz on drums; Greg Winiarz on bass; and Joe Poper on guitar, banjo and vocals, the soundscape pops from start to finish.

Gora starts the collection off with Walentyna, an ode to Valentina Tereshkova, a Soviet cosmonaut who was the first woman in space, arranging his polka from the 1964 original.

If you want familiar English tunes, there’s Goodbye My Love Goodbye from 1973, Beautiful Sunday from 1972 and Travelin' Man from 1961, all with enough left over from the originals to let you sing along but plenty of Gorale stamps in them, too.

The Polish in me came out during the traditional melody Siwy Kon – Hupaj Hiupaj, with the English subtitle The Old Gray Mare.

I closed my eyes to the recollection of listening to my father’s polka albums in the living room, thinking the lyrics to the first two were “Jimmy Corn” and “Hoop-Eye Shoop-Eye.” Heck, that’s the way I sang them, anyway, and my Polka-drummer dad certainly never corrected me. As far as the English part of this one here, you’ll want to join in on “The old gray mare just ain’t what she used to be,” right?

An interesting couplet comes from Gore’s decision to put his own English lyrical spin on the 1904 Polish traditional Beer Pub, and then follow up three songs later with a Polish version of the traditional melody.

The Beyond may come from closing cut Piccola, a 1960 Italian hit, so bright and fresh still that I could imagine it fronting as a TV or movie title cut today.

My Polish Roots & Beyond by John Gora & Gorale will be available in the LPL local music collection.