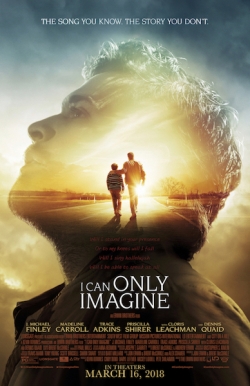 His father was a tough and mean cuss. The kind that went way past the line, too, to physical violence.

His mom up and left them to fend for themselves.

And onward Bart went, with God in his life thanks to a Christian camp, and good friends and a nice girl and music always in his ears.

Still life sure didn’t come easy, not even when he left to join a band and pressed onward in a rickety bus.

This movie, I Can Only Imagine, is the true story of the lead singer of Christian band MercyMe and the song of the same name that captured a nation’s attention and lifted him and the band to great things.

True, this and that.

But truth be told, some of the things in this biopic directed by the Erwin brothers, Andrew and Jon, from the screenplay by Jon and Brent McCorkle, aren’t fact at all, but dramatic stretches to add to the Hollywood-ness of it all.

I won’t go on and on about that because the movie is pretty darn heartwarming and the crux of it all is still straight and true.

Millard’s father found God while he was dying of cancer and turned his life around. The son forgave those bad acts and wrote a song about it. Said song became an inspiration for millions of people and a hit to both Christian and secular formats.

The telling of it here is helped by a handful of wonderful acting performances, newcomers and veterans mixing so well.

The lead is handled in fine style by J. Michael Finley, who made his chops in musical theater. On the big screen, he spends his time looking awkward and sheepish, which is, after all, the dominant traits of the young man he is portraying. Until he gets hold of the microphone and belts out a song. That is when all heck breaks loose.

Dennis Quaid is a grizzled and mean bear as his dad, and Cloris Leachman is a soothing southern grandma. Country star Trace Adkins is perfect as the Nashville agent who takes the man and band under his wing.

All of it adds up to a very feel good slice of life, whatever your religious beliefs may be.

‘I Can Only Imagine’ is part of the LPL’s MediaBank collection.