by Mark Bialczak | 4 months ago

It's a get-together long in the making, and Edgar Pagan is excited about bringing his band to the LPL.

Pagan and his band mates were scheduled to perform here on April 19, 2020.

But the arrival of COVID-19 forced the postponement of that final Latin Rhythm Series show many subsequent live events, for Grupo Pagan and the library.

Fast forward. The musicians and the LPL come together at 2 p.m. Sunday, Oct. 16, in the Carman Community Room, for the second concert of the Fall Music Series.

Bassist-vocalist and band leader Pagan will be joined by Rhonda Paduano on vocals, keyboards and percussion; Bill DiCosimo on keyboards; Adam Fisher on guitar; Dave Donley on percussion; and Dave Chitamber on drums. 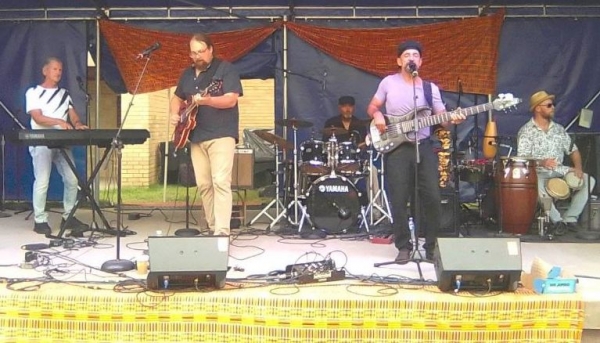 Pagan said this has been a good year for the band.

“We’ve been very fortunate as things open up. Some venues have been a little cautious, and understandably so,” he said. “But, we are grateful for the busy season we had. So great to see people out enjoying themselves and the music, It brings us joy to see smiling faces. Especially after all we’ve been through.”

Pagan said he’s also been in the recording studio and working with longtime friend and producer Jimmy Haslip to prepare the material for the band’s next album.

“It’s looking like a January release,” he said. “We’re very excited, as its been almost 10 years since our last release.”

Those who come to the Oct. 16 show will experience the usual high-energy Grupo Pagan blend of rock, Latin, world, blues, soul on originals and carefully chosen covers. “We’ll be adding some rice and beans to some favorites,” Pagan said.

Posted in At the LPL; Tagged Fall Music Series;