by Mark Bialczak | 23 days ago

Expect sounds that might be unexpected with the third edition of the LPL’s Fall Music Series.

Chuck Schiele and the Quatro performs at 2 p.m. Sunday, Nov. 20, in the Carman Community Room. The band leader says the quartet makes music its own way.

I reached out to Schiele with questions about the band and the gig.

Welcome to a Q-and-A with Central New York singer and songwriter Chuck Schiele.

Who are the band members and instruments they'll be playing at the library concert? 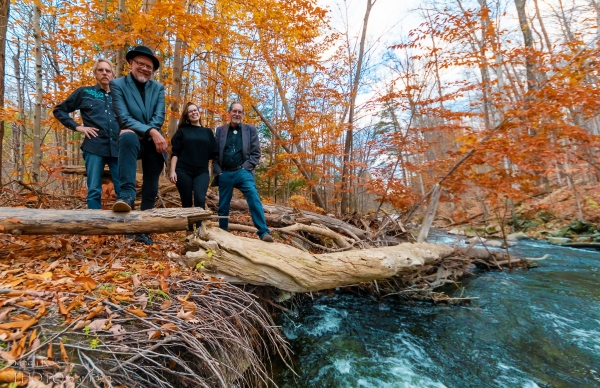 How do you best describe the band's musical vibe?

We're the only group we know of with this instrumentation.

So, for starters, we're in our own universe. We do not seek to sound like so-and-so. We sound like us.

Our creative choices are unique. That's part of the vibe.

Lyrically, we talk a lot about soul, higher love, earthly love in a non-traditional, secular way.

We have our own mix, which is the object. We're kind of elegant, but we also rock. No drummer, and people will dance. We sound irreverent, but still familiar.  We can run any style of material though this mix and it works. From Sinatra to Ozzy ... still shoving boundaries.

How did Quatro first get together?

John Dancks is always in my corner about my songs. It starts there with his faith in me that way and his encouragement to start something. In the meantime I'd been casually chatting on and off with George Newton (per encounters in social circles while out on the town) about playing together sometime. I am a huge fan of George's ability to listen to what's happening while simultaneously responding. Anyway, one day over a beer with John Dancks we took a spin and we liked it.

In the meantime again ...  A former art student of mine was well on her way in the working world when we met for an annual "so-how's-it-going-for-you" lunch. I learned she played cello during this visit. Since I have a history of working with string players throughout my career, I encouraged her to jam with us. It worked. We all discovered something all our own. And it stuck.

A case where an unlikely combination of people were led to the same artistic petri dish.

Is it feeling like a bit of a live gig rebound of late after the halt for the pandemic?

It seemed like things started to come back, last summer (2021). But in a limping fashion. This year we got busy, again. We're pretty busy. To the point of your question, we formed right before the pandemic kicked in. While everybody went to the bleachers so-to-speak, we got busy. We had seven non-fretted instruments and a new combo of sounds to discover. A set list to grow. We used the pandemic down-time robustly as our lab time. Incubation. The idea being that when we emerged into the resumed live scene, we'd be ready.

How did you all get through that trying time after March 2020?

We had each other. We went tribal. While everybody was careful about being out among others, we simply went tribal about it. Meaning that while we were abiding by the safety precautions, we still found ways to rehearse and continue working on the project. We rehearsed at least once a week, with writing sessions, behind the scenes branding stuff ... AND ... we released a video every month featuring a song at a time from a recent live concert, so that we could create engagement with our community even though live shows were down.

What are you and the band looking forward to from the Nov. 20 gig?

Playing music with each other and for you all. That simple. Our very first joy is playing music with one another. When you guys are there with us, the fellowship thing emerges and things happen. This is when it becomes more like a ride than a set list. Magic. It's also our first appearance at the library, so we're looking forward to that aspect as well, thanks to Russ Tarby.

What can the library show crowd expect to experience at the show?

You can expect to leave in a better mood than when you arrived. We're gonna make you feel really good. A big unusually beautiful, lush sound. Big vocals with big adventurous, ambitious harmonies. We discovered a jaw-dropping, world-class singer in Heather who we move more and more into the lead vocal spot. We also take our visual/set design a little more seriously than the usual bar band thing. We see the Quatro as an audio-visual-multi-sensory thing. It is. We treat it and behave as an art project.

Posted in At the LPL; Tagged Fall Music Series;