When 'A Monster Calls,' Brave Lad Conor Searches for Answers 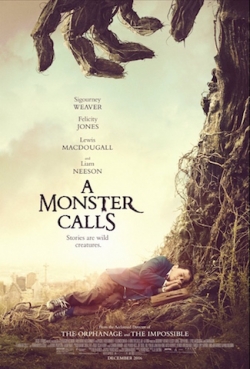 Some things in Conor O’Malley’s life are all too real.

The 10-year-old has to deal with bullies and unpopularity at school. Worse yet, at home his father isn’t around, splitting from their decidedly British digs to move to sunnier skies in L.A. Even topping this, his beloved mother is sick, battling an illness that keeps progressing despite escalating treatments. That brings in the care of his grandma, in a house with guidelines he can’t stand.

Other things are quite unbelievable.

When Conor looks out his bedroom window, he’s comforted by the sight of a giant, old yew tree.

It turns into a monster, with stories to tell and questions to ask.

Directed by J.A. Bayona from the screenplay Patrick Ness based on his novel, A Monster Calls is a curious look into the mind of an intelligent child with possibly too much to ponder.

There’s a lot good within the striking Blu-Ray scenes on our living room flat screen, starting with the advanced performance of young actor Lewis MacDougall and his interaction with the experience of Felicity Jones as his caring and fading mom and Sigourney Weaver as the tired, distant but needed matriarch. The voicing of Liam Neeson as the Monster magnificently, thunderously looms over Conor’s thoughts and deeds, so much, and the viewer’s as well.

The make-believe part certainly is not fit for children. Too broad and scary is the Monster; too intricate is the story.

Nevertheless, it feels as if that’s where the moral, the payoff, the conclusion, is aimed.

'A Monster Calls' is part of the LPL's MediaBank collection.