Things to Do Just in Case ... You Know

Back in March, we had a program planned on How to Write Your Own Obituary, and a fair number of people had signed up for it.  Obviously, with the temporary closing due to th COVID-19 crisis, we didn’t present it. Tomorrow, the world willing, we'll start a series here with the major points we were going to discuss.

As we planned that program, I started thinking about a book I saw in a little bookstore in Skaneateles a few years ago. It was called I’m Dead. Now What? It was a book where you put all the important information your survivors would need to know when you shuffled off this mortal coil...things like accounts that needed to be closed, insurance policies, passwords, where you hide the Christmas presents, and so on. I thought about buying it at the time, but for some reason put it off until later. 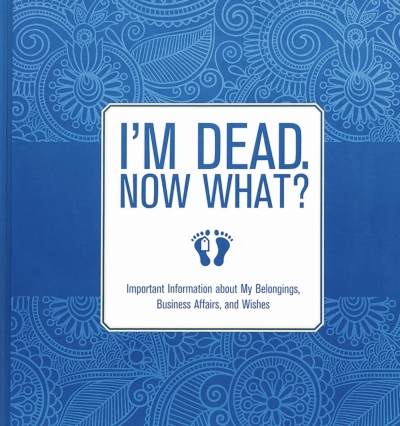 And for some strange reason, I’ve starting thinking about it again. I don’t know about you, but I’m living my life two weeks at a time. I’m almost 64, diabetic, and African-American...the demographic of the people that COVID-19 is most likely to be really bad for. Obviously, this has gotten me thinking about making sure that certain people have access to important information should I shuffle off sometime soon (although, on the whole, I’d rather shuffle off to Buffalo).

One of the most important pieces of information I want my wife to know is all the passwords I’ve been keeping track of. Yes...all the passwords I’ve been keeping track of...not just for me, but for her, our daughters, and her parents. I’ve been using a password management app called Dashlane, but she didn’t know about it, nor did she know the password or PIN for it. I installed the app on her phone and iPad, and made sure she knew how to get in.

You don’t have to rush out and get that book (as if anyone’s rushing out anywhere), or even necessarily get Dashlane, but I would seriously suggest making sure that someone you trust has all your passwords. That’s a good idea for any time, not just during a global pandemic. After all, as Tom Jones said in the song Without Love, “tomorrow is promised to no one.” And, for what it’s worth, I always suggest that people with new iPhones or iPads make sure that a family member knows their lock screen code and their AppleID password so that they don’t inherit a useless brick should they get hit by a bus.

But that’s not all. I mentioned where you hide the Christmas presents. That’s actually a big concern for me, because I do a bit of shopping in advance, and things go in a special box in my closet that people know they’re not supposed to look around in. In fact, my mother’s gift just arrived a few weeks ago. Now I’m starting to label the few things that are already in there, so that if I’m not around, at least they’ll get to the right people. It also means letting my wife know about the Target gift cards we buy every two weeks with the groceries, to be used in December for buying gifts for the poor.

Yes, I know...it’s a real downer to talk about, but it’s really something that should be kept in mind even in the best of times.

And it’ll be a far far better thing you do to take care of it while you can!