Home » Blog » The Kid returns a man, and he's ready to be a rock for his community

The Kid returns a man, and he's ready to be a rock for his community

Josh Burke was 17 years old the last time I sat with him in a conference room, talking rock music and life.

The kid was all right back then, a guitar player of considerable talent and a junior at Cicero-North Syracuse High School with a story to tell that gathered plenty of attention after it was splashed on the pages of the big daily and syracuse.com. 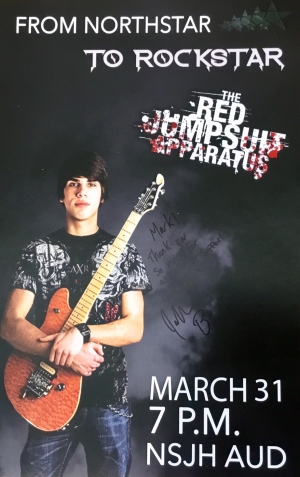 Burke uprooted his life shortly after that day and chased the rock ‘n’ roll dream.

He became a guitar player for The Red Jump Suit Apparatus, with home life based in Florida.

Dad Michael Burke gets in touch with me through Facebook. Would I like an interview to catch up with a story on my blog and that of my new place of work at the neighboring library?

The kid is more than all right.

We sat down for a good talk in the small conference room of the Liverpool Public Library the morning following The Red Jump Suit Apparatus concert. Back in the day, parents Michael and Linda joined in the interview. This time, they and his grandma chose to wander around the main room instead.

“It was surreal,” Josh said of the Friday night homecoming show in the big junior high auditorium. “Walking around the school opened up some memories. It really was cool to see, to be back, 23 now, 15 then, new faces, old faces.”

Who was he especially glad to see?

“My Uncle Kevin. Todd Stiles from the local music scene. Jimmy Falco, my music teacher back in the day. Seeing the unexpected faces, too, who showed up. ‘Hey, guys!’ Reconnecting was special. Home will always be Syracuse, really. As as we drove here, got close … Hey, I’ve lived in Jacksonville, Florida, for five years. I like the weather there more, yeah. But, Syracuse!”

Burke left Central New York with a year of high school left. Michael and Linda moved to Florida with him, to make sure their son kept his head straight.

“I was too young and immature,” he says.

“I turned out all right,” he said. “I did get my GED. I’m an Orange Park (High School) alumnus. Ha. CNS is my school. Always will be. Orange Park was a week-and-a-half for some courses and to take the test. I should at least have that (high school degree). An old friend, Christine, her mother sent me a 2012 CNS … that thing you hang in your car.”

He says his band mates kept him honest, too. Front man Ronnie Winter and the rest of the guys set great examples as they record and tour.

“I learned from them about life and music,” Josh said.

Josh says that Ronnie Winter’s talent on guitar and drums and overall sense of rhythm sets a good example on stage and in the recording studio. And on the road, Ronnie and his brother Randy are great.

“The longest I’ve been away from my family has been six months,” Josh said of his residence with a Vegas-style act by the name of Recycled Percussions, sort of a Blue Man Group. “A show. A production. Flame things. I actually played drums, too,” he said with a smile. “With them, I got to go to Alaska. With Jumpsuit, I got to go to Hawaii. I have all 50 states in.”

Also, a tour with The Red Jumpsuit Apparatus to Asia, is under his belt, with another coming to Australia. The band is really big overseas, and promoters put them up in fancy accommodations.

But life is full of realities, such as driving with the guys around the U.S. in a Sprinter, pulling a trailer and staying in mid-end hotels.

“The guys are 10 years older than me. They understand me. I love those guys. I do,” he says. So much so that he trusts that even if the band runs its course – as he understand can happen if a tough business – they will remain friends for life.

“When you talk to them off the stage, they are regular people,” he says. “They have a special talent, big it’s just regular guys trying to have fun and enjoy life.” 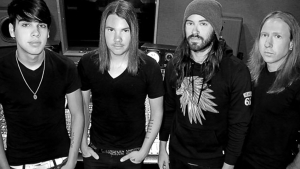 Josh Burke and his bandmates in The Red Jumpsuit Apparatus.

He says his favorite part of the rock life is playing concerts.

He remembers the night in 2011 he got the call that CNS classmate Taylor Fleming was killed in a car accident.

“I was in the van when I heard, about 15 minutes before a set, and I get told about such a tragedy. I went out and I played. It was such a safe space,” he said. “It was me and them, and I wanted to play our set. What affects me, affect them.”

The driving and travel.

“But I don’t have a screaming at me,” he said with a smile.

The band has the tour to Australia on the near horizon.

“I genuinely like talking to people,” he said. “When people are excited to meet you, and they act good, it’s good.”

He admits that there can be exceptions.

“There have been a couple over the top,” Josh said of social media connections. “A couple of videos of a couple posts over the line. When I see them, I’m nice. I defuse it or I ignore it. I do not fuel it. When I see bouncers getting people down and away from the band, I thank them. I say, ‘Kudos for that.’ ”

They’re also prepping to record the next album. The title has just been chosen: The Awakening.

“We haven’t all sat down as a collective about the songs yet,” Josh said. “That will happen in June. But the direction it’s shaping up as is a heavy rock album. We write what we feel like at the time. It’s time for a raw thing.”

The LPL will host "Teen Open Mic Night" at 6 p.m. Wednesday, Nov. 29 in the Carman Community Room. If you'd like to perform, please send an email to luke.connor@LPL.org by Nov. 22. Otherwise, come watch the show.