Home » Blog » Songwriters of All Styles, Levels Share Their Songs and Suggestions

Songwriters of All Styles, Levels Share Their Songs and Suggestions 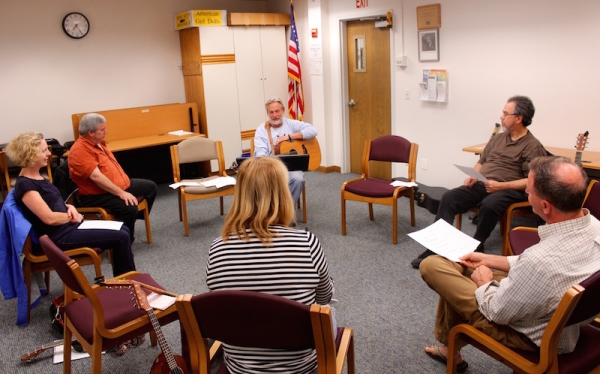 The first Wednesday of every month, songwriters of the community can pull into the circle in the LPL's Sargent Meeting Room, pull out a song when it's their turn, and bare their souls.

The 6:30 p.m. session session is titled Words and Music Songwriter Woodshed. Melissa Sieling, a veteran singer, songwriter and performer who calls Liverpool home, serves as the wise and welcoming host.

In the October session, a half-dozen participants sang their songs, then listened carefully when the rest of the group considered what they had heard, then offered words of suggestion, encouragement and support for the process and craft.

Phrases such as "I like they key changes" and "It's all in the phrasing" met with nods and, and maybe even a smile or two.

It was obvious that all were learning, about themselves and their work, as well as the songwriting process as a whole.

"Coming to a songwriting session is a bit intimidating," Seiling says about the gatherings. "As songwriters, we can be sensitive folks. The most common question I get when new people reach out is, 'But I'm just a beginner. Won't I look silly in front of all those experienced songwriters?'

"Seriously, that is the most common question I get. Not 'What time do we meet?' or 'How much time does each songwriter get?' No one looks silly," she says. "No matter how long we've been doing this, we are all fearful of our song being misunderstood. Our newest people are pretty scared the first time they present. It's like jumping into the deep end of the pool.

"It doesn't take long before they figure out we are there to support each other and help each other develop our skills as songwriters. And it's fun," Sieling says.

Sieling says the group considers both the musical and lyrical forms of presented songs. Most regulars bring guitar. One first-time member brought a boom box as accompaniment. Another sang her first song a cappella, but now she accompanies herself on ukulele after Sieling showed her how playing, and changing chords under melodies, would help her songwriting.

In any case, everybody is welcome. She asks that you plan to stay for the whole event as a courtesy to the other songwriters.

"Sit through one session to get a feel for what happens," Sieling says. "I think bring anything that could potentially be a song. A melodic riff on a guitar. A tune you can sing but maybe don't have harmonies assigned to yet. Words that aren't formed into verses or refrains, maybe just an idea for a song or a poem you might like to turn into a song. Write it down."

Words and Music Songwriter Woodshed next meets from 6:30 to 9 p.m. Wednesday, Dec. 6, in the Sargent Meeting Room.