Right now eBooks are pretty much all you can get from us until we open to the public again. But that’s not what I’m talking about.

My daughter has taken to reading Harlequin romance novels. I know, I know...I talked about them a few posts ago, and mentioned how my old girlfriend got totally unrealistic ideas about what relationships were like from them. Well, having heard me talk about that over the years, my teenaged daughter decided to get a few to check out, just out of curiosity.

Oh. My. Goodness. These were not your father’s [old girlfriend’s] romance novels! Over the course of 40 years, a lot had changed, and the slightly steamy, but still innocent romance novels that my old girlfriend read, and based her ideas of relationships on, had been replaced by 50 Shades of Blue.Some of the passages she read to us weren’t just steamy, they were downright graphic.

But as I said...a lot has changed over the course of 40 years, and audiences want to read something that matches their world now.

Obviously, these modern Harlequins aren’t going to be a good example of what my old girlfriend was reading way back when, so I decided to do a little research to see if any of the old titles from the 70s and 80s were still available.

They were...from Amazon! As eBooks!

When I told my daughter about this, she turned up her nose. You see, she’s a “book snob.” If it’s not printed on paper for you to hold in your hands, she doesn’t want it. Yes, I could actually get my hands on a paper copy of one of those books...for $20.00...but my “thrifty” mind rebelled at the idea of paying that much money for a book that probably only cost $2.50 when it was new, and that I could download onto her iPad for $2.99. 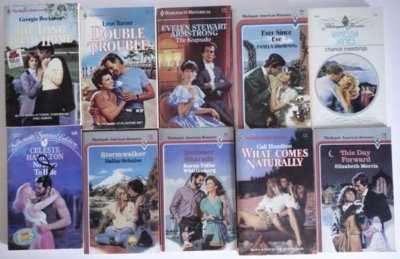 So, because she’s a book snob, it looks like she’s never going to get around to reading an old Harlequin for comparison.

Actually, there’s hope. I put out a call among my Facebook friends to see if they had any of these still sitting in their attics, collecting dust (and mold). One thinks she does, and is going to check for me. So maybe my daughter will get to read an old style Harlequin after all.

But really...sometimes you just gotta read an eBook.