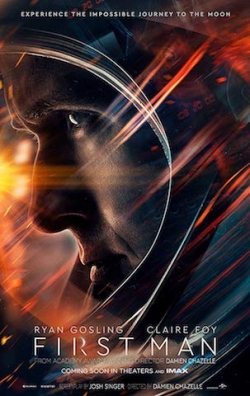 Fifty years ago, Neil Armstrong stepped down that Apollo 11 ladder and made history.

First Man takes us inside many places. Airplane rides to the edge of the atmosphere that led to the Gemini series, onward and upward. The tight-knit crew of men NASA tapped to ride into space. The capsules that took them. And, most significantly, this 2-hour, 21-minute epic docu-drama directed by Damien Chazelle from the screenplay by Josh Singer based on the book by James B. Hansen bounces around the head of Neil Armstrong.

Ryan Gosling plays the first man on the moon as one dry character, indeed.

Smart, no doubt. His engineering background indeed helped him land the spot as commander of the mission taking the first manned mission to the moon.

Intense, yes. When any of the other NASA men attempt to make light of, well, anything at all, his eyes bore straight through them.

As far as emotions, though, Gosling keeps this Neil Armstrong bottled up. Maybe that’s the way he interpreted the way Armstrong in real life shouldered the loss he and his wife encountered of their baby daughter to cancer. Janet Armstrong is the one left to display all the emotions. On the eve of Apollo 11, for example, she must force her husband to talk to their two sons about the upcoming mission, and what it means to him ... including the chances that he might not return. Claire Foy does quite well as the vinegar to her husband’s cool water. 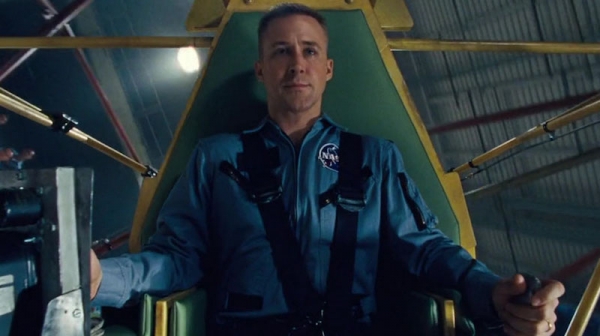 Chazelle turns a great amount of his focus on the nuts and bolts of the spaceships.

This is a gritty look at how man went into space.
When Armstrong lifts from the ground, everything around him shakes, rattles and practically rolls. That comes later, when he must right the spinning capsule or lose more than the mission. All of this thunders across the screen in gritty realism.

Oh, the beauty of that stark, powdery lunar landscape as drawn up in First Man.
First Man screens free as part of the LPL’ Newly Released Movies series at 1 p.m. Tuesday, March 26, at NOPL’s North Syracuse branch. First Man is part of the LPL’s MediaBank collection.