by Mark Bialczak | 19 months ago

It's always obvious that Edgar Pagan and Bill DiCosimo are as comfortable as can be playing music together.

For more than two decades, bass player Pagan and keyboardist DiCosimo have blended their talents, on stage and in the recording studio. Central New Yorkers know them quite well for their contributions with Grupo Pagan, the fusion band that quite joyfully blends rock and jazz and blues and Latin and world styles all with eyes, ears and hearts always turned to peace, joy and, yes, unity.

Right here in their home community of Central New York, Grupo Pagan was scheduled to play the finale for the LPL's  2020 Latin Rhythms series in the Carman Community Room, a show that was postponed by the pandemic. Pagan says he's determined to bring his band to the library when circumstances permit.

And he and DiCosimo will have a new CD's worth of songs to consider when that happens. 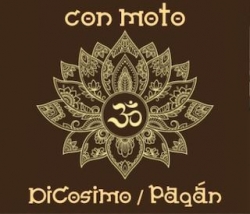 Out new for the duo is Con Monto, a collection of seven songs that Pagan calls the duo's "solo album." That's an interesting term. Indeed the songs start with a solid foundation that stems from the Rhodes, B3 and piano work of DiCosimo and the bass play (and some cool lead vocals) from Pagan. But there's much, much more.

The album was produced and includes much instrumental work from Grammy-winner Jimmy Haslip. Haslip, long known for his work with the Yellowjackets, joins in on additional bass and keyboards, cuatro, percussion and background vocals.

And momentum it has, with studio work from Jeff Lorber on keyboards, Karma Auger on drums and percussiion, Gary Novak on drums, Jimmy Branly on percussion, Jeff Richman on guitar, Paulie Cerra on horns, Nick Kellie on guitar and Jose Varona on percussion. That's quite a lineup. And Central New York star-of-the-world Bob Hallligan is featured, too, on the bonus track Show the World.

Yes, the five originals are indeed a treat,

The opening cut, So It Begins, offers layers of lush for a smooth start. Samba Pagan delivers dreamy suspense, peace and rhythm and roll. Blues Clues unwinds like a dramatic Steely Dan tale. Taino Spirit steps with the elegance of a guitar-and-keyboard dance from Latin rhythm masters. And closer Show The World without a doubt is a song for right now with its hopes and dreams for great things for all.

And about those two covers ... well chosen and well done.

Magic Carpet Ride puts a new spell on Steppenwolf's classic, thanks to Pagan's gotcha vocals and DiCosimo's whirling B3.

Cisco Kid will make fans of the original move with its shine and pluck, mixed and shaken with that heat and tension, oh! oh! oh! Was the classic by War really way back in 1972?!

Watch a video of Show the World.

Watch a video of The Making of Con Moto.

Con Moto will be available for checkout in the LPL CD collection.