Home » Blog » Meet the Art of John Mariani through November

Meet the Art of John Mariani through November 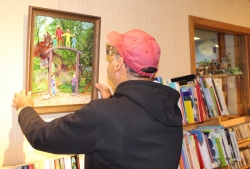 Artist John Mariani hangs a painting commissioned by an Eastwood neighbor from a park that honors the artist's late son, Louis.

To John Mariani, “art” used to be what the folks with him in the newsroom called the photographs they placed on the newspaper page around all the  stories and headlines.

But now the retired reporter and editor has moved from his three-plus decades at The Post-Standard and Syracuse.com to a spot in front of an easel.

Art has become what he creates in acrylics, mainly from photographs he takes of scenes that catch his eye around the community or images sent to him from family, friends and others who are beginning to catch on to his talent with a brush.

His was a painful start.

Disc surgery at the age of 55 forced Mariani to two months of recovery time at home on the couch. He discovered PBS painting shows hosted by Bob Ross and Jerry Arnell

“They’d produce a masterpiece in a 30-minute show, and in a drug-induced haze, I’d say, ‘I can do that,’ “ Mariani recalls.

So when he was healthy enough, he bought some supplies, drove to Erie Canal Park for a photo-taking session, and followed along at home. When he showed the results to his wife and daughter, they provided encouragement.

Back to the newsroom he went for three years.

Then he retired, and thought he might drive cab.

“The rest, as they say, is history,” Mariani says. 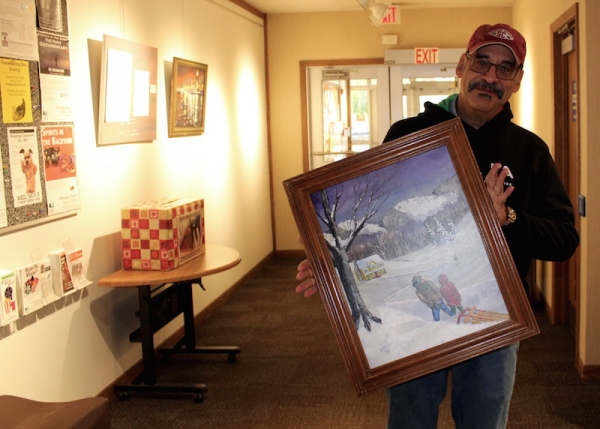 John Mariani painted this piece specifically for his November exhibit in the LPL lobby. He imagined the scene.

Through November, 16 of Mariani’s pieces are hanging on the walls of the LPL for his exhibit titled “From Keyboard to Canvas: The Writer Becomes An Artist.” This follows his June exhibit ion the walls of Hospice of CNY, arranged through the Newhouse School at Syracuse University.

Mariani has had several pieces commissioned since then. He’s sold more than a dozen overall.

Three of his paintings hanging in the LPL are new. One he painted specifically for the exhibit.

In addition to the pieces on the wall that have not yet been purchased – yes, a few he asked the owners if he could borrow them back for this exhibit – Mariani will bring greeting cards and postcards that he’s had printed from his paintings. He commissions those as well as paintings.

In addition to working from photographs, he’s also started painting from what he imagines in his mind as well.

“Sherri asked me why I look so serious,” Mariani says. “I told her I had to concentrate. I was looking in the mirror!”

Posted in Art; Tagged Artists, Painting, Art in the Lobby;