Home » Blog » Writing Your Own Obituary ... or Anybody's, Part I. Take Notes

Writing Your Own Obituary ... or Anybody's, Part I. Take Notes

I promise you, really, I didn’t come up with this idea because of the current COVID crisis. We had planned to do an obituary writing program back in March, and had quite a number of people sign up. But it got indefinitely postponed because of...you guessed it...the current COVID crisis. But then I started to think about if there were some way to still get the information out there for those who were interested, and those who hadn’t thought about it before; and here we are!

The idea for this came from a perfect storm of events in my life. The first was that my 90-year-old mother is suffering from Alzheimer’s Disease, and I know that I’m going to have to write her obituary eventually. The second was trying to find out more information about my old choir director from when I was a boy soprano back in Jersey. The third was the combination of the first two having me think about what I wanted people to know...or be able to find out...about me after I’m gone.

If they’re done right, obituaries can be a treasure trove of information to genealogists and historians. If they’re done wrong, they’re worse than useless. So let’s talk about what you need.

Obviously, you need to have information! And I’m talking about more than just the birth and death dates that make up a death notice. This is your chance to try to tell this person's story as best you can.

This is a problem with my mother, because we don’t know much about her childhood, her teenage years, or her years as a young adult. We don’t even know much about when she went back to work when we were in school. This is because she never talked much about her childhood, and my sister and I never paid attention to where she worked until we were in middle school, and she was at the job she retired from, over 20 years ago.

But there was obviously a whole lot more than that. A whole lot that we didn’t know. A whole life before us and before marriage. But as I said before, this is because she never talked about it, and with the Alzheimer’s, we definitely weren’t going to get those stories now.

Or so we thought.

When I told someone from the Alzheimer’s Association about my situation, they reminded me that people suffering from Alzheimer’s often float back and forth in and out of lucidity, and that I should consider asking my mother a few questions every now and then, and taking notes.

That’s exactly what I did. Three times a week, during my drive home from work, I’d call her and ask her questions (not to worry...it’s a hands-free phone that works through the dashboard). Now I know where she went to grade school and high school. I have a few more details about her life, but not as much as I’d like.

Of course, with my mother, I’m dealing with an extreme case. If it’s another family member we’re talking about, you may already have all the good family stories...or at least be able to get them while they’re still around.

How do you get these stories? One way is to sit and interview them with some sort of recording device. Most smartphones will let you do that. But let’s face it, unless you’ve got a kid with a “family history” project that they have to do for school, lot of older people will become immediately suspicious, and ask if you’re doing this because you think they’re going to die soon. 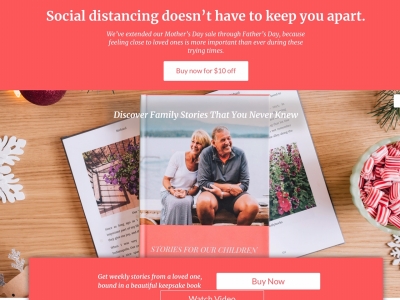 Another way is to sign them up with a service like StoryWorth, which sends them one question a week for a year, which they get to send back an answer to. This works great if your person knows how to use email. With StoryWorth, you can let them send 52 questions randomly or you can choose and write your own questions, to be sent in the order you choose. It’s definitely worth looking into as a way to collect and preserve the family history (and of getting good information for an obituary).

And what if your person isn’t tech savvy, or you think the price of StoryWorth is a little steep? Well, you could always create your own faux StoryWorth by sending them a question a week in the mail, for them to write back about. If they get suspicious about why you’re doing this, you can always say it was a great family history project you heard about from the library, and something you can do to stave off boredom during quarantine.

So the main thing you’ve learned here in part one is to get information...as much information as you can...any way you know how!

Next time, I’ll talk about telling the story in a way that will make sense not only to contemporaries, but also to people in future generations.