Gosling, Stone sing and dance their way into a faraway 'La La Land' 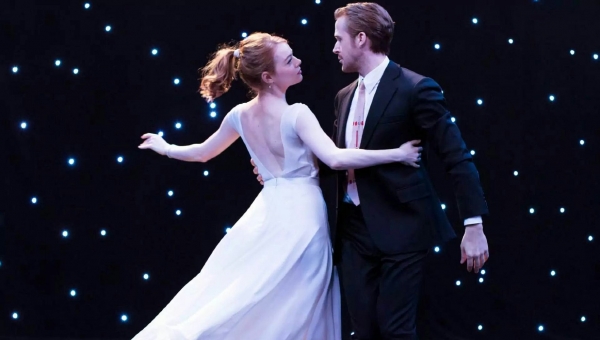 Director and writer Damien Chazelle wastes not one moment to let everybody know La La Land is going to bring everybody back to the days when Hollywood musicals were big, bold and bright.

The first five or so of his 128 minutes of this beautifully shot and choreographed picture are spent on an L.A. Freeway, traffic stopped for a song-and-dance routine that builds slowly to a our first encounter between Sebastian and Mia. The singing-and-dancing is seamless, done in one camera shot, a magical moment of merriment where all the marks are hit and the potential of the movie seems limitless. The brush-up between the man and woman is much less, a beeped-horn and raised fingers of derision, a fleeting moment of derision when the traffic gets going and she doesn’t drive away fast enough to suit him in the car behind her.

Of course, stars Ryan Goslng and Emma Stone will meet soon enough again, he playing piano in one last flourish against the wishes of is craggy boss to earn his walking papers in a restaurant dining room as she walks in the door, and then brushing past her hello.

And then again at an outdoor party, when he’s playing cheesy 80s retro music with the band and she’s giving him guff for it before they leave together for some hate-love relationship-starting.

At the heart, he’s a jazz man trying to prop up a dying genre by buying a club all his own and she’s an aspiring actress and writer taking auditions while pouring coffee at a studio cafe while they break into song and dance in the style of Fred and Ginger. That would be Astaire and Rogers, really, as these two sing pretty well and dance even better. The plot thickens as they fall pretty hard. And then life, as it often does, gets in the way for both of them.

Individually, Gosling and Stone shine in these roles like the stars they’ve come to be. He’s intense in his love for the music, and she’s quite believable reading her lines in those excruciating audition scenes and crafting her own one-woman show.

And the plot is full of believable hooks, with their tussles, individually and with each other, about work commitments and personal growth.

The passion chemistry never quite seems to sizzle between Gosling and Stone, though, not even when they’re dancing among the stars in a planetarium scene in which Chazelle pulls out all stops and suspends reality. Even in their most intimate of times, to me they seem to be more comfortable in the friend zone.

'La La Land' is part of the LPL MediaBank collection.