Get Ready for a Wild Ride with 'A Wrinkle in Time' 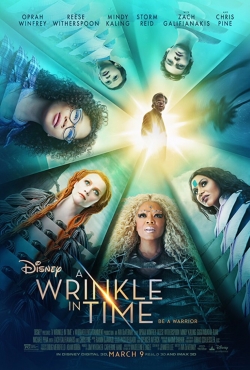 If you were a card-carrying kid of the 1960s or 70s, A Wrinkle in Time most likely made its way into your holy-cow discussions.

Library card, that is.

The fantasy novel by Madeleine L’Engle was published in 1962. In 1963, it won the Newberry Medal from the Association of Library Service for Children.

It was about 13-year-old Meg Murry and her little brother Charles Wallace, who take one heck of a trip in search of her missing scientist father.

Yeah, I read it when I was in school, and its story of good and evil and time and space opened my mind to a lot of different thoughts, as I recall now.

I’m thinking back because of the colorful release of Disney’s A Wrinkle in Time, directed by Ava DuVernay from the screenplay that Jennifer Lee based on L’Engle’s award-winner.

If ever a novel from then was ready for today’s technology, this is it.

With Oprah Winfrey, Reese Witherspoon and Mindy Kaling playing the trio of fifth-dimensional know-it-alls Mrs. Which, Mrs. Whatsit and Mrs. Who in fine eccentric style and Storm Reid just about stealing the show as unflagging, devoted daughter Meg, there’s plenty to dive into for viewers of all ages as the kids, with classmate Calvin in tow, ride the tesseract to try to find dad.

Chris Pine as the patriarch and Gugu Mbatha-Raw as the matriarch complete the complicated family photo.

All they leave for the movie-goer is the task of suspending disbelief and going along for the wild ride.

'A Wrinkle in Time is part of the LPL’s MediaBank collection.