Home » Blog » Denzel Washington comes up large in 'Fences,' and Viola Davis is more than his match

Denzel Washington comes up large in 'Fences,' and Viola Davis is more than his match 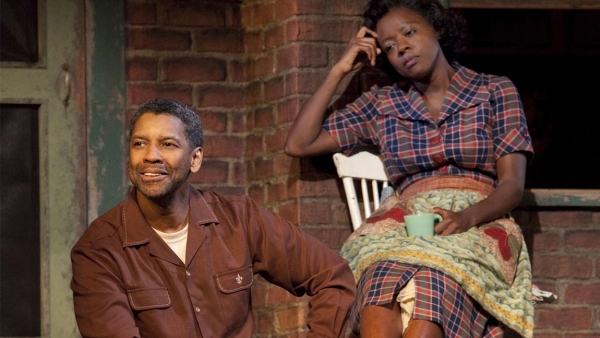 Denzel Washington and Viola Davis find the uneasy peace in 'Fences.' (From IMDb.com)

Washington directed and stands tall (and wide) as Troy Maxson, the self-made leader of his gathering in the proud little brick house in a lower-class African American Pittsburgh neighborhood. Wilson adapted the screenplay from his Pulitzer Prize-winning drama that premiered in 1987 but was set in the 1950s. The movie’s message holds steady today.

Maxson is a garbage collector with a past of which he is both proud and troubled. He was a star baseball player in the Negro Leagues, a man whose talents were great enough to take him to the bigs if only he were not playing before the time Jackie Robinson broke the color barrier. His response to this is a never-ending bitterness … and an equally rooted belief that he was better than the current crop … and that things won’t get better for his offspring, either. This doesn’t bode well for his son, Cody, who happens to be a high school football player good enough to be recruited by colleges.

Maxson’s bubbling stew of a personality remains likeable to his best friend Bono, a fellow man on the back of the refuse truck who sees his lifelong pal stand up to the union and become the first black driver in the city of Pittsburgh; barely tolerable for eldest son Lyons, a laid back guy from a previous relationship who’d rather try to make his way as a musician and borrow 10 bucks from his pops on payday than give in to the same type of workaday life; integral for brother Gabe, who came back from the war with a plate in his head and a new way of looking at and living life; and necessary for wife Rose, who dutifully hangs the laundry on the backyard line and sorts out the daily family needs while Troy does his considerable thing.

That backyard serves as the main location for most of the 2-hour, 19-minute drama, this being so true to a stage play. And it works well, Troy slowly building that wooden fence that keeps most things out and lets other things in.

It all looks stark and right on the Blu-Ray version on the living room flat screen watching with my dear wife Karen, this collection of great acting. Yes, Washington puts the complicated layers of Troy together like the star that he is, and it is a role for him to relish and us to remember. But it is Viola Davis as Rose, she of shoulders that are even more figuratively broad than her husband’s to bear all that his life has put down upon them, that truly is a winner in every scene. When Rose finally tells Troy exactly how it is, how it has been, and how it will be between them, it’s a forever scene, indeed.

All do the most with what Wilson’s script and Washington’s direction gives them, in fact.

Stephen Henderson is cool as a guy who’ll share the Friday pint of gin after work and tell his best bud not to mess up the best thing in his life. Mykelti Williamson is triumphant as a man whose deck was shuffled by war but who still tries to stay in every hand he’s dealt the best he knows how. Jovan Adepo is adept as a young man forced to grow up and learn the hard way.

Davis surely earned her Oscar for Best Supporting Actress, as did Washington, Wilson and the movie itself deserve the nominations for Best Actor, Best Adapted Screenplay and Best Picture.

"Fences" is part of the LPL MediaBank collection.