Board of Trustees Welcomes Dennis McLaughlin

by Mark Bialczak | 10 months ago

The July get-together for the LPL Board of Trustees was memorable, indeed.

Kay Budmen and John Hluchyj were sworn in for their second five-year terms after election by Liverpool Central School District voters in May, and Dennis McLaughlin was sworn in for a one-year appointment.

A new slate of officers was also approved for the next 12 months.

I wrote about it for my weekly LPL column in the community Eagle News. 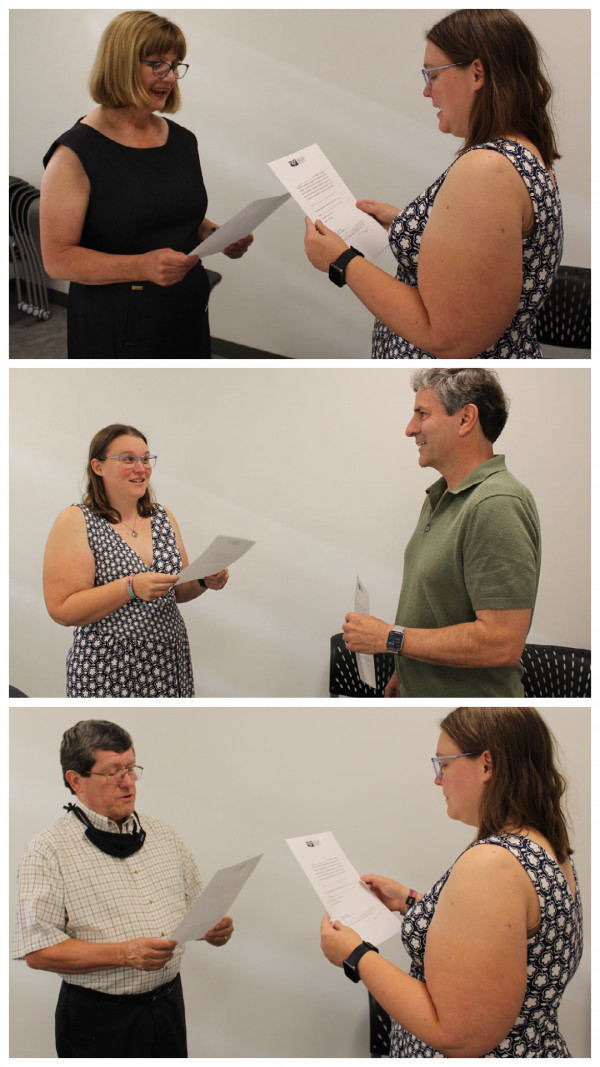 Kay Budmen, John Hluchyj and Dennis McLaughlin, top to bottom, are sworn in by Ashley Gouger at the July meeting of the LPL Board of Trustees.

You can read it on Eagle Newsonline here.

Or you can read it here:

The Liverpool Public Library Board of Trustees welcomed an enthusiastic new member during the meeting of Wednesday, July 14, in the Sargent Meeting Room.

Dennis McLaughlin was sworn in for a one-year term after accepting an appointment to fill the position vacated when Donald MacLaughlin’s five-year term expired and he decided not to run again.

McLaughlin is a familiar face in the rooms of the LPL.

He’s a regular patron, and has served as a computer tutor to help other library users.

McLaughlin said he’s eager to help the board inform the community about how special the LPL can be.

“I like the location of the library. It’s right in the center of the village, and I think it’s symbolically the center of Liverpool,” he said. “I’ve always advocated for the library, and often tell people about the diversity of services the library offers. From young to old, pre-schooler to retiree, the library has something for you.

“As a trustee, I hope to spread the word to more people that the library is not just a building to lend books, it’s a gathering place to meet new people, enjoy new programs, learn new hobbies, and most of all, it’s free,” McLaughlin said.

“My goal, as a trustee, would be finding ways to reach more of the community and show them how welcoming the library is,” he said.

McLaughlin could run for election for a five-year term in May 2022.

The next meeting will take play at 6:30 p.m. Wednesday, Aug. 11, in the Carman Community Room. It is open to the public.

Find information about the Board of Trustees here.

Posted in At the LPL; Tagged Board of Trustees;