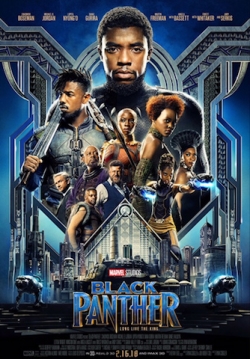 You bet that Black Panther goes where no superhero movie ever previously dared.

This Marvel Universe breakthrough co-written and directed by Ryan Coogler primarily takes place in the fictional African nation of Wakanda. Its cast includes younger African American stars Chadwick Boseman, Michael B. Jordan and Lupita Nyongo’o at the top of their craft, and long-established veterans Angela Bassett and Forest Whitaker obviously relishing their chance at making their mark in a superhero film.

And this story is something that audiences of color cheered long and hard everywhere. As it should be. Its heroes stand tall and fight hard for things good and  right and close to their heart: Heritage and family and empowerment.

As the tale unfolds, Europeans have exploited Wakanda by stealing some of their most precious extraterrestrial resource and using it to build a supremely powerful weapon.

It’s up to their king, T’Challa, to right things by donning his suit and conjuring up his special powers as Black Panther.

His honor and the tasks are further challenged by other African tribes and a surprise outsider.

It makes for many blazing battles that should enthrall all superhero movie fans, and moral choices to keep the compass spinning.

Boseman, for sure, solidifies his place as a top star.

He’d already been big-screen solid as Jackie Robinson, James Brown and Thurgood Marshall, all superheroes in real life, no?

All told, the 2-hour, 14-minute film is filled with intrigue and compelling characters to keep this franchise solidly in the Marvel deck.

Black Panther is part of the LPL’s MediaBank collection.