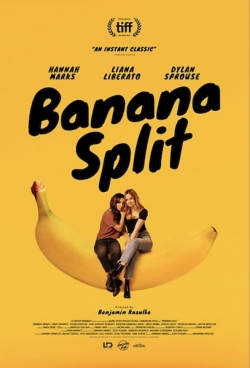 Oooooh, they're eating at Heid's!

The tables and wall decorations are like old friends at Liverpool's famous intersection.

Hey, they're hanging out at the Palace Theatre!

That lobby and those seats have welcomed so many in the heart of Eastwood.

That house in which they're holding a huge leaving-high-school party in looks like it fits in here. Yup. Scene shot on Sedgewick Drive in Syracuse. That bowling alley is ours, yes, and school scenes were filmed right inside the old Zogg School, now home to the company brought to Liverpool by producer Jeremy Garelick and his American High company.

Interesting, then, that Banana Split is said to take place in California. That's why we see beaches and palms in the outdoor scenes.

OK. That does not diminish the 1-hour, 28-minute indie directed by Benjamin Kasulke from the script by lead actress Hannah Marks and Joey Power  a bit to this Liverpool Public Library Communications Specialist.

This we're-moving-past-high-school tale works because the story carries so much heart.

Producer Garelick has a pretty good history guiding work with The Wedding Ringer and The Break-Up on his resume. This one has smarts on its side. The stars are Marks and Liana Liberato, who play two young women who by conventional means should not like each other much.

April just broke up with Nick. Nick took up with Clara.

April and Clara meet at a party and ...

So they hang out, keeping it a secret from Nick.

But into every going-to-college soon triangle some drama must fall.

It’s worth the free stream on Hoopla digital for LPL cardholders.